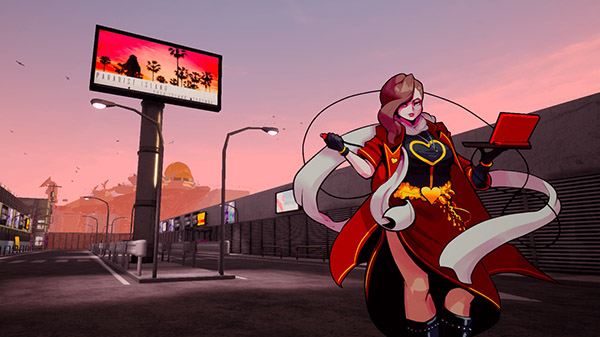 Paradise Killer will exhibit LudoNarraCon 2020 from April 24 to 27 with a free demo beginning April 24. LudoNarraCon is a indie games festival held on Steam. This year’s event will feature over 40 exhibitors, over 10 panels from industry leaders, discounts on over 50 games, and over 20 playable demos.

An island outside of reality. A rogue human civilization hoping to resurrect dead alien gods. A murder behind locked doors.

Paradise is an island that regenerates every few millennia. The psychic power that the alien worshipers within release into the universe is meant to feed and eventually resurrect their fallen deities. But this force also attracts undesired interest from demons, who eventually corrupt each island — until a new alternate reality is birthed by the Council.

The system isn’t perfect, but it will be one day — on Perfect 25, the next island-to-be. But on the eve of rebirth, the Council is murdered and Paradise is killed.

In the aftermath, the “investigation freak” Lady Love Dies is summoned from exile to find the culprit. This is the crime to end all crimes.

Brief Battles out now on consoles and PC

Death end re;Quest 2 launches this summer in the west

Geoff Keighley announces Summer Game Fest 2020, a season of video game news and events from May to August